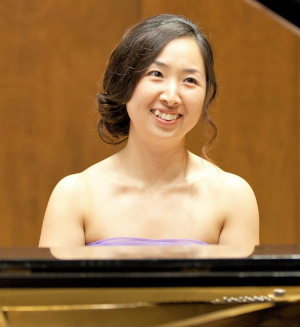 Dr. Kelly Cho was born in Busan, South Korea. She began piano lessons at the age of six. That same year she was awarded the second prize at the Han Kook Ilbo Piano Competition (A major piano competition in Korea), even though she had not yet begun to take music seriously.

Dr. Cho studied at the Orange County High School of the Arts, and she was selected twice as the 'Outstanding Performer of the Year.' During her junior year of high school, she won 1st prize in the PTA Council Reflections Contest (Composition). After high school, she entered the Musicians Institute in Hollywood to study Modern music, but since she met Dr. Matthews, she started to play classical music again. She received the 'Piano Award' several times and 'The Fedderman Scholarship' at Chapman University. She also played in several chamber orchestras, including the Pacific Symphony Youth Orchestra and the Chapman Chamber Orchestra, and Symphony Irvine, and she also has given numerous recitals.

She received her Master's and Doctoral degree in Piano Performance from the University of Southern California with Dr. Stewart Gordon.

Dr. Cho is an active member of several music teacher organizations, including MTAC, MTNA, American College of Musicians, and SYMF, and she also adjudicates for auditions every year.

Dr. Cho served as a music director at Christ Church Presbyterian in Irvine for almost five years.
Currently, She teaches at Santiago Canyon College and Santa Ana College and also an accompanist at Vanguard University.
Many of her students have won several piano competitions and made outstanding achievements.